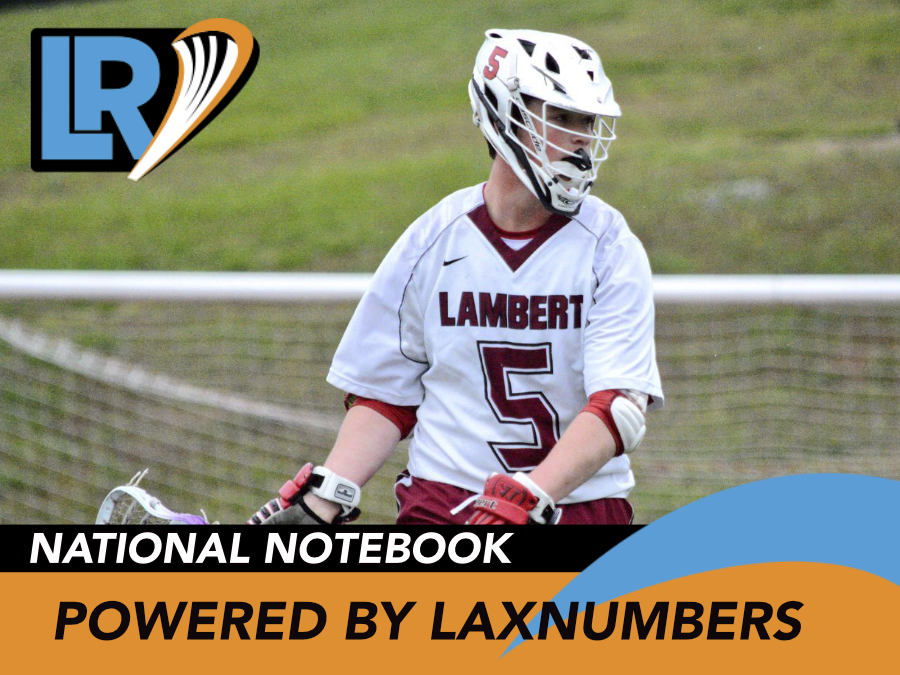 New Trier (Ill.) boys’ lacrosse team has been placed on probation for the entire 2022 and 2023 seasons, first reported by RecordNorthShore.com.

“New Trier reported in a letter to parents that it had investigated a "serious and disturbing hazing incident" that happened at an off-campus party attended by members of the boys' lacrosse team. Following the investigation, which continued through spring break, the team has been placed on probation for the entire 2022 and 2023 seasons.”

The Trevians had out-of-state games against Upper Arlington (Ohio), MICDS (Mo.), and Rockhurst Jesuit (Mo.) on their schedule.

The email that went out to parents states, from Superintendent Paul Sally states, “We are continuing our investigation and will end the team’s season if other serious behaviors occur or are uncovered.”

New Trier was 17-1 last season and is one of the premier programs in Illinois. The Trevians have 13 state championships in program history.

Ohio’s rankings were released this week. It’s still early in the season with most teams recording less than five games, but the early No. 1 (as of April 3), is St. Ignatius Cleveland (Ohio) with a 2-1 record.

The South and West Region rankings were updated this week. We’ll start with a quick look at the West Rankings Jesuit Portland (Ore.) takes the early spot at No. 1. The Crusaders have been dominant early, outsourcing opponents 103-28. Their only loss was 8-7 to Sacred Heart Prep (Calif.) on March 19.

IMG National (Fla.) maintains the top spot with a 7-0 record in the South Region. The Ascenders have wins over Dallas Jesuit, Loyola-Blakefield (Md.) and Gilman (Md.) this season.

This season, Hoggard has outscored its opponents 138-13, including a 17-7 win over Woodberry Forest (Va.) on March 29. Zachary Coyle led the Vikings with five points with Kyle McCarthy and Trey Parkes added four points in the win. Overall, eight players scored at least two points in the victory. Big in-state games against Fuquay-Varina (N.C.) and Charlotte Catholic (N.C.) are coming up later this season.

Lambert’s streak is the longest active streak in the nation. Corner Canyon is second with a 31 game streak.

Other extended streaks of at least 15 games include:

Two of the top teams in New Jersey opened their seasons by playing a triple-overtime thriller. Summit (N.J.), the No. 4 team in the NJ.com ranking, defeated No. 8 Westfield (N.J.) 11-10 on March 31. Senior Colin Beatty scored five goals, including the game-winner, to help the team start 1-0.

The No. 1 team in Texas took on the No. 7 California team on April 2, with Texas coming out the victor.

Dallas Jesuit (Texas) defeated Torrey Pines (Calif.) 10-9 in four overtimes. The Rangers started slow, trailing the Falcons 6-1 at halftime. But Dallas Jesuit outscored Torrey Pines 5-2 to close the gap in the third quarter. Two goals by Beckett Foley along with goals from Will Reading, Nate Duncan and McAllister Hobbs narrowed the lead to 8-6. Reading scored the game-winning goal in the fourth overtime to help the Rangers improve to 11-2.

This is the fourth out-of-state win for Dallas Jesuit this season. They posted a win over Florida’s Top 2 teams, St. Andrew’s (Fla.) and St. Thomas Aquinas (Fla.). The Rangers remain undefeated in Texas this season.

Powell Takes Over at CBA

NNY360 has a good article on Ryan Powell taking his first high school coaching job at Christian Brothers-Syracuse (N.Y.). Powell takes over for former CBA coach Ric Beardsley who resigned in May. Christian-Brothers is coming off a 12-5 season in 2021. The program won its first state championship under Beardsley, when they won the Class D title in 2017.

New West Genesee (N.Y.) Head Coach Eric Burns earned his first career victory with a 14-8 win over Ballston Spa (N.Y.) on March 30. Burns takes over the Wildcats after Shaun Smith resigned and took the job at Jordan-Elbridge (N.Y.). Burns was the junior varsity head coach and also coached the freshman team prior to taking the job as the varsity coach.

Ryan McLaughlin from West Boca Raton (Fla.) posted an impressive 27-for-30 face-off performance in late February against Spanish River (Fla.). He won 15-of-16 in a 17-6 win over Atlantic (Fla.) on March 8. The sophomore is winning 89 percent of his chances this season.

Austin Nevins totaled 12 points for Battlefield (Va.) on March 30 against John Champe (Va.). The senior scored seven goals and dished out five assists in the 16-5 victory.

Colin Hannigan helped Springfield-Delco (Pa.) to an 11-8 win over Garnet Valley (Pa.) with a 17-for-22 performance at the face-off. The senior also dished out one assist in the victory. Delco is the No. 9 team in the latest Phillylacrosse.com ranking. Garnet Valley entered the week at No. 10.

With four goals in a win over Lakeland (N.J.), Westwood (N.J.) senior Jon Ruff notched the 100th point of his career. Ruff has 103 career points after the season-opener on March 31. He is coming off a 61-point season in which he scored 51 goals.