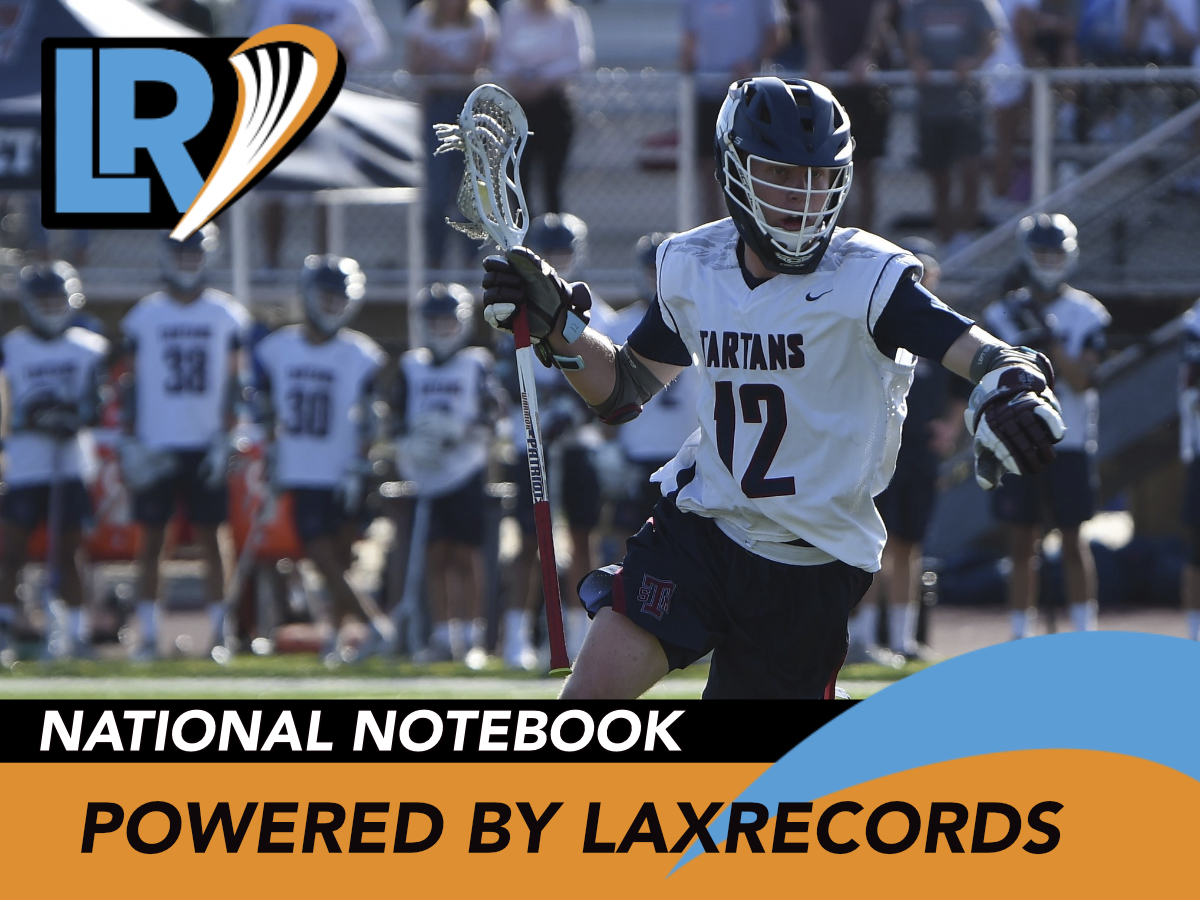 This week’s national notebook takes a look at some notable games that could have an impact on national and state rankings, in addition to notable player performances that have been submitted in the last week.

Culver Academy is the No. 1 team among Laxnumbers Independent Prep Rankings with a 5-1 record. The Eagles went 2-1 on their Maryland road trip, downing McDonogh and Bullis (Md.). Their only loss came on the road against Boys’ Latin (Md.) on March 23. They traveled to Gonzaga (D.C.) on March 27 before heading to Ohio to face Archbishop Moeller (Ohio).

McDonogh rebounded from the loss with a 10-5 road win over Haverford School (Pa.). The Eagles are 3-2 on the season as they head into conference play. The Maryland Interscholastic Athletic Association (MIAA) schedule starts with a road game at Boys’ Latin.

In a battle of California power programs. Torrey Pines (Calif.) defeated St. Ignatius Prep (Calif.) 14-13. Sophomore Blake Washburn scored the game-winning goal with 13 seconds left to give the Falcons the victory. St. Ignatius Prep had won the last two meetings between these programs, dating back to 2019.

Corona Del Mar is 6-0 and the No. 1 team in the early California rankings. The Sea Kings’ road win over Torrey Pines along with a dominant win over Palos Verdes (Calif.) and an overtime victory against Regis Jesuit (Colo.) help them take the top spot.

Mountain Vista (Colo.) is coming off its first state title in 2021 after they made an incredible playoff run. The Golden Eagles won three-straight overtime games, including the 10-9 championship victory over Valor Christian (Colo.). The defending champions are off to a 4-0 start after a season-opening win over Mullen (Colo.), followed by road wins over La Costa Canyon (Calif.) and La Jolla HS (Calif.).

Ponte Vedra (Fla.) and Nease (Fla.) played their annual "Battle for the Bridge" on March 22. Ponte Vedra sits at No. 5 in Florida and came away with a 17-1 victory. Senior Will Corbett (Queens College) led the Sharks with four goals and two assists. Senior Jack Reed (Vermont) added four assists and two goals. Senior Gavin Koors for Nease had 18 saves in goal. The Sharks are now 10-2 and No. 6 in Florida.

In a rematch from last year’s state championship, Brother Rice (Mich.) and Hartland (Mich.) faced off on March 25. Brother Rice took the 15-10 win after winning 14-9 in the championship game last season. Bo Lockwood, who set the state record for points in a season last year, scored five goals and two assists in the loss. Hartland is 23-0 against Michigan teams, except Brother Rice. They are 0-3 against the Warriors over the last two seasons.

Chaminade (N.Y.) opened its season with a statement win - defeating Ward Melville (N.Y.) 14-3. Gavin Creo and Charles Bálsamo each scored three goals to lead the Flyers to victory. Chaminade opened the game by scoring six goals in the first quarter. The defense only allowed one goal in each of the final three quarters to help Chaminade open its season 1-0. Ward Melville dropped to 0-2 on the year.

There has been good intra-state play in the Pacific Northwest early in the season. The 2022 Laxnumbers rankings have yet to go live for Washington and if the early season is any indication, the final No. 1 team could go down to the wire.

Bellevue (Wash.) is off to a 5-0 start this season with Owen Lombardi (nine goals) and Sean Quigley (8g, 6a) leading the way.

Eastlake (Wash.) started its season with a 9-8 overtime loss to O’Dea (Wash.) and a 10-9 loss to Bellevue to start 1-2. But a 10-9 overtime win over Mercer Island, followed by an 11-4 wi over Juanita (Wash.) has the Wolves at 3-2 with 14 games left in the regular season. Gavin Dallas scored four goals and Logan Eller dished out three assists and scored a goal in the win over Mercer Island.

Mercer Island (Wash.) is 5-1 on the strength of a defense that has allowed only 38 goals. Mitch Fischer leads the team with 12 points and Max Youssefnia leads with eight goals on the season.

O’Dea (Wash.) is 4-0 with a solid defense leading the way. The Fighting Irish have yet to allow any team to score double-digits in goals this season. O’Dea faces a brutal stretch at the end of its season - playing nine of its final 11 games on the road. Among those final games, they face Bellevue, La Costa Canyon (Calif.) and Mercer Island. Goalie Eli Hinson is allowing an average of 4 goals against this season. Through four games he has 19 saves.

The Washington Post released its boys lacrosse Top 10 last week and to little surprise, St. John’s (D.C.) sits at the top spot. The Cadets return most of its players from the team that won the inaugural D.C. lacrosse championship and reached the title game at the Geico Nationals. Perennial Washington Catholic Athletic Conference power Gonzaga (D.C.) comes in at No. 2.

La Salle College (Pa.) sophomore Stevie Davis won 14-of-17 face-offs and scored a goal, helping the Explorers to a 9-7 win over Radnor (Pa.).

Tate Jones notched the 200th point of his career with a three-point game against Cary (N.C.) on March 25. The Middle Creek (N.C.) senior becomes the 100th reported player in state history to reach 200 career points. The feat is even more noteworthy with Jones playing only 16 games during his sophomore and junior seasons due to COVID-19. He averaged more than five points per game in each of the last three seasons, including 5.1 this year through nine games. Through nine games this season, Jones has 204 career points on 131 goals and 73 assists. Middle Creek is 8-1 and No. 6 in the state.

David Pritchard, a senior from Hickory (N.C.), made a career-high 37 saves in a March 10 game against T.C. Roberson (N.C.), breaking the previous reported state record. Pritchard broke Drew Wheeler’s (Fuquay-Varina) record of 31 saves to take the top spot in North Carolina. The Mary Washington commit’s performance places him among the Top 25 nationally for the most saves in a single game. He has 267 career saves after making 118 as a junior.

While LaxRecords and Laxnumbers work to integrate during the 2022 season, there’s a couple of ways to get players, teams, coaches highlighted in our weekly notebook. Some of the forms live on LaxRecords.com until we finalize a permanent solution.